There's no such thing as bad weather, just the wrong clothes

Five intrepid Thursday walkers, led by Ron "The rain man" Binet, launched the  2020 season on March 4  with a dampish walk from Centennial Park to Bronte Beach.​ 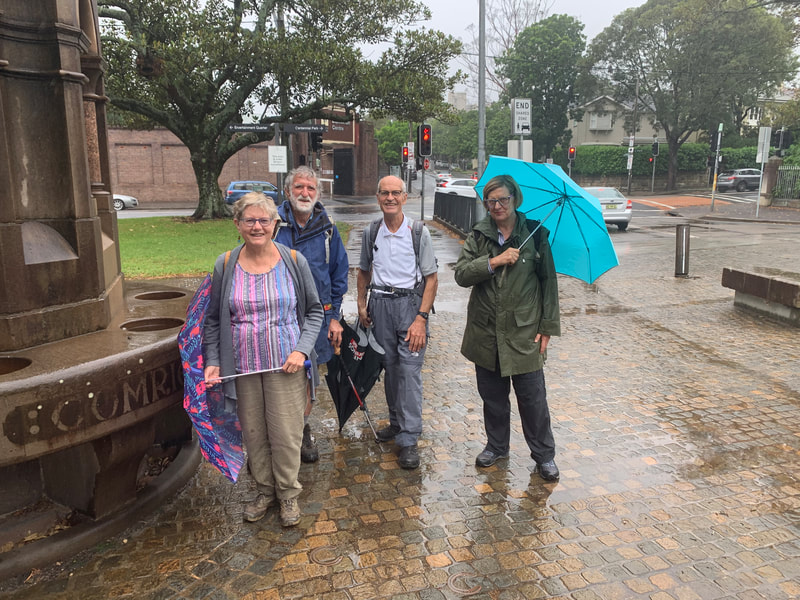 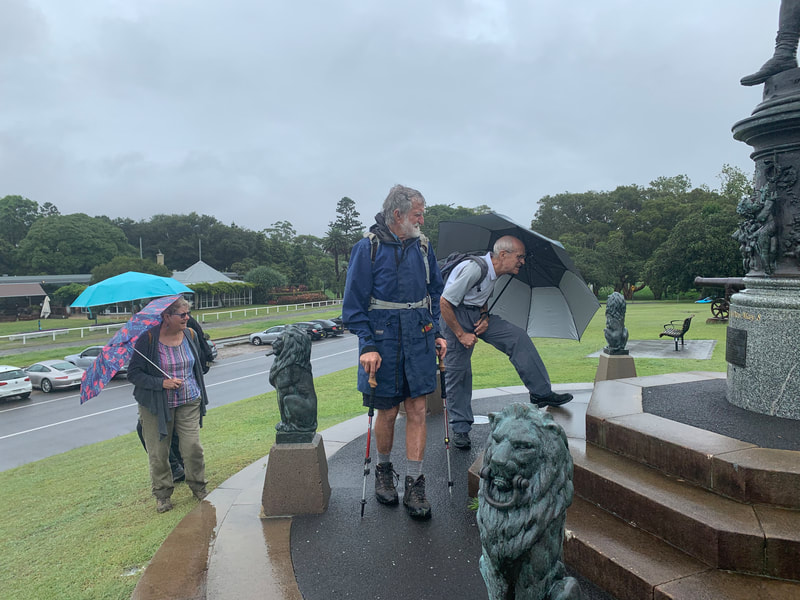 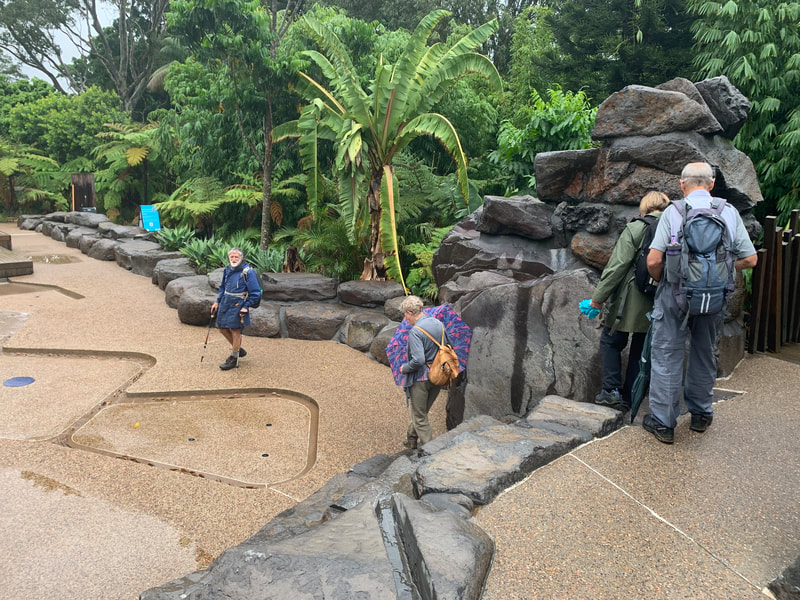 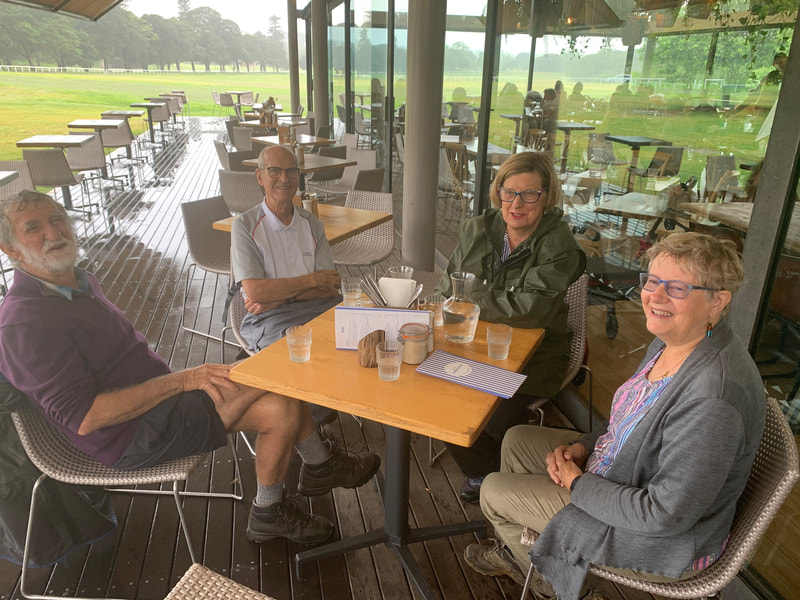 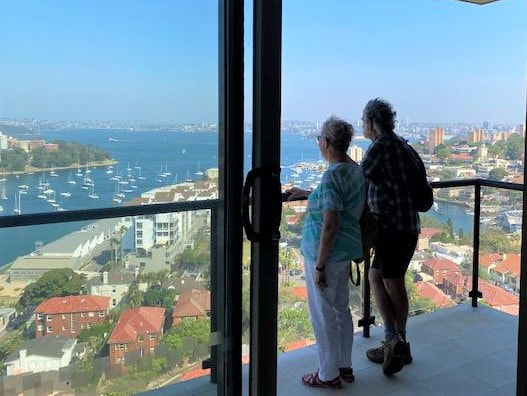 After an arduous approach trek through Wendy Whitely's Garden at Nth Sydney, the wild Jacaranda forest of  Kirribilli and the fortifications of a former submarine base, 10 intrepid Yarrawoodians made it to Judi's 15th floor apartment.  There the Sherpa support party had wine, cheese, strawberries and cherries on hand. Talk about tough! 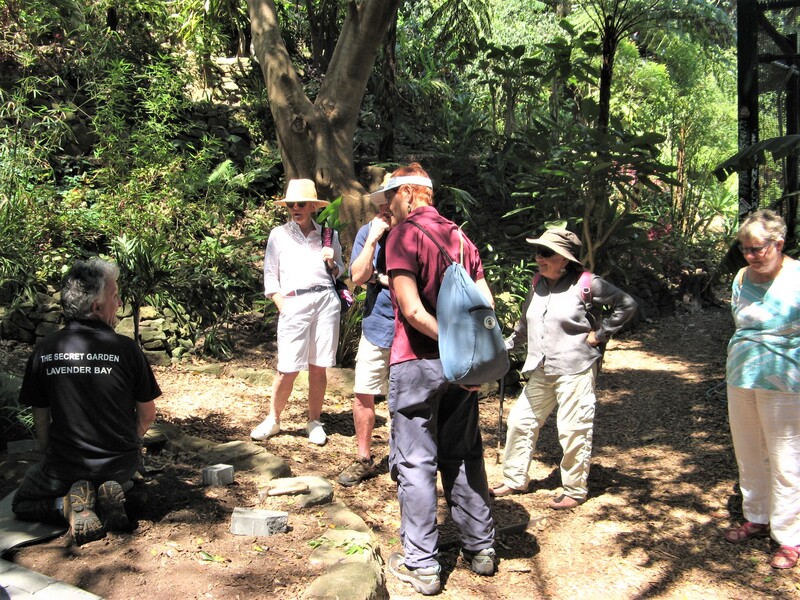 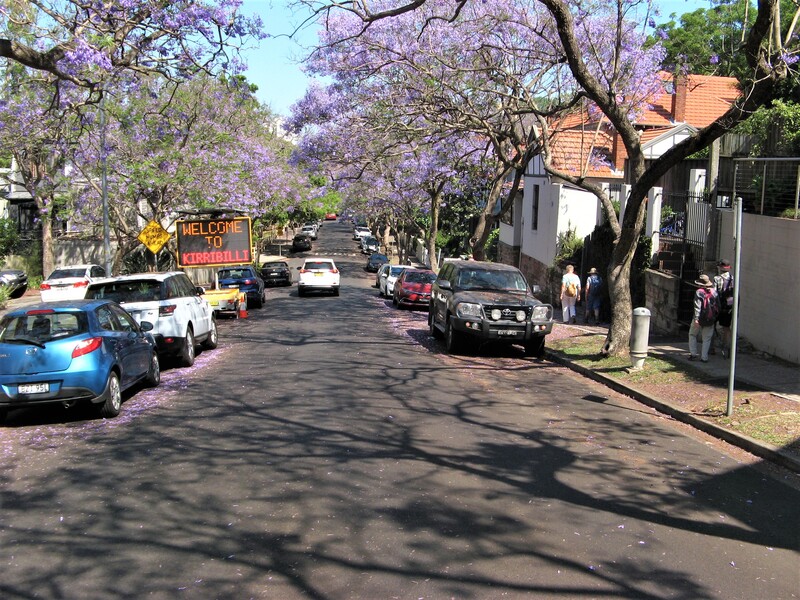 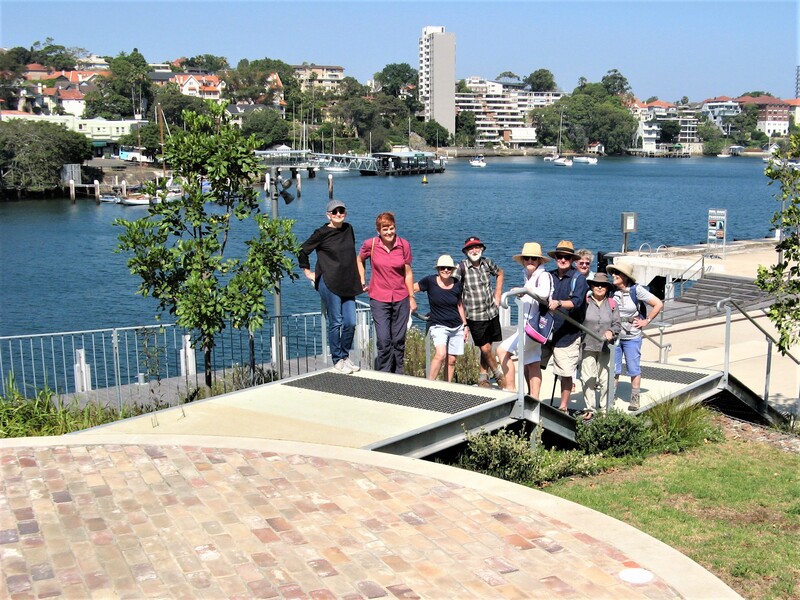 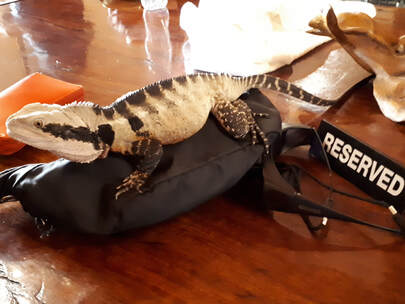 A  dragon dropped by

Not satisfied that some Yarrawoodians had seen enough wildlife on their walks, the chef at the Victoria and Albert Guesthouse in Mt Victoria produced his pet eastern water dragon.  The handsome fellow (the dragon) sat motionless on the table while coffee and tea were enjoyed.

Meeting Derek's dragon was just one of many memorable moments in two days (September 26-27. 2019) spent on the Upper Blue Mountains. Apart from dining well and sleeping very comfortably at the Victoria and Albert, the party  took in some varied and spectacular scenery on the Kings Tableland (Wentworth Falls) and the Asgard Plateau (Mt Victoria). The walks were demanding but rewarding and several in the party were pleasantly surprised to discover walking capabilities they didn't know they had. 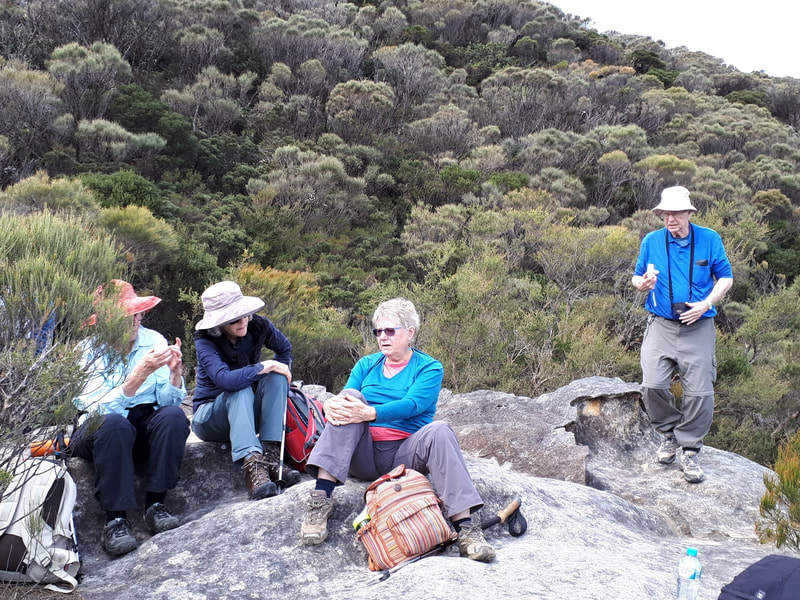 A rare spectacle
On September 1 , 2019 , a Yarrawood party enjoyed a walk in the Kamay-Botany Bay National Park to see an exceptional display of wildflowers in areas razed by bushfires twp years ago.  There were unusual expanses of flowers and hundreds of Xanthorrhoeas (Grass Trees) were in flower 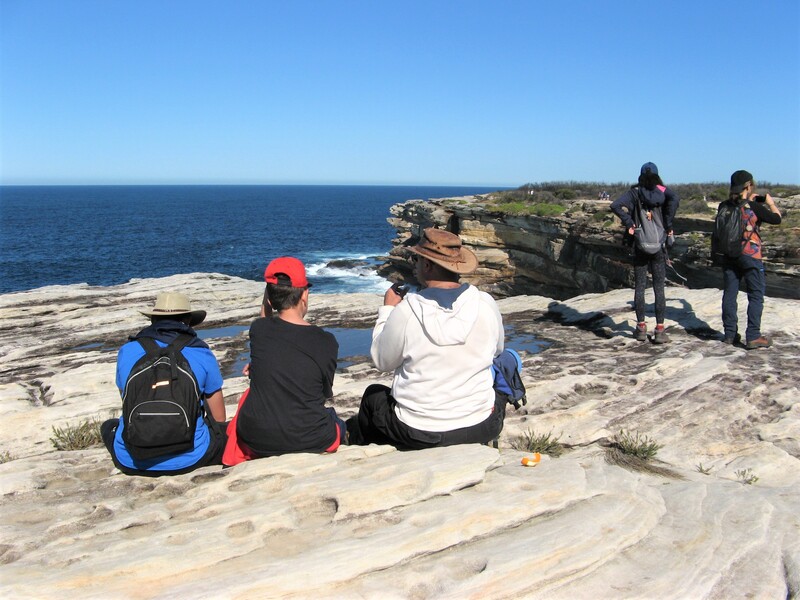 Yarrawoodian honoured for her contribution to bushwalking 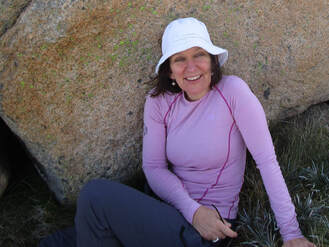 Bushwalking NSW has instituted the Chardon Award to recognise outstanding contributions to the advancement of bushwalking in NSW. Yarrawood luminary, Dodie Green, was the 2017 recipient of the award. A shield to record the names of Chardon Award recipients has now been  created.   Dodie is to be a special guest of Bushwalkling NSW when the shield is unveiled on August 20, 2019. 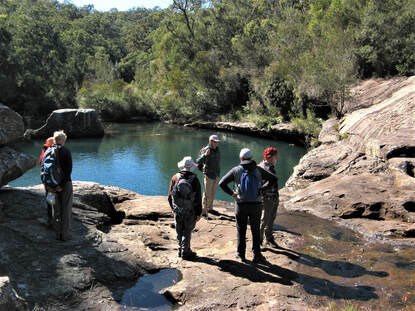 ​It's taken 36 years but a Yarrawood party has finally made it to the exceptionally beautiful Minerva Pool in the Dharawal National Park. Although the Park is  just south of Campbelltown it has somehow slipped under the Club's radar. On Friday, August 9, 2019, that changed when a Yarrawood party walked to the pool and the nearby Jingga Falls. 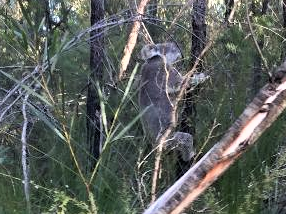 Koala sighting caps off a weekend of car camping in the Yengo National Park
​Despite smoke from control burns limiting the walking that could be done, Morrie's car camp in the Yengo National Park over the weekend of July 27-28, 2019 was a great success.  Choosing to delay their departure from the camp site for a day, Liz and Ron Binet were treated to a  koala sighting.  Its seems the koala choose to wait until the crowd had gone before making an appearance.
​ 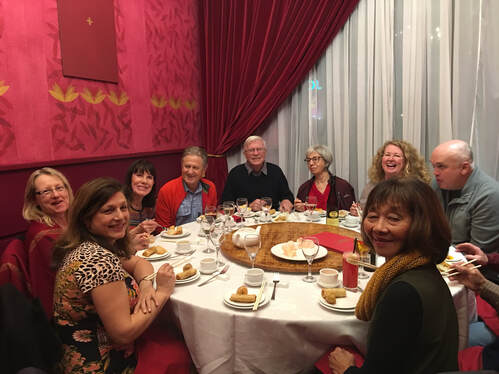 ​​The launch of the "reinvented" Yarrawood was a great success
A strong contingent of members gathered at  Sydney's popular Marigold Restaurant on July 20, 2019 to mark the beginning of a new chapter in the Yarrawood story.

"In addition to having a good time, we are here to celebrate the Yarrawood that was and to launch the renewed and invigorated Yarrawood", the Club President said in opening the proceedings.

Apart from enjoying a splendid banquet, members entered into the spirit of the occasion by coming up with many ideas for future walks, trips and other activities.


Changes and additions to the Club committee

​Les Higgins has volunteered to serve as Club President for the remainder of 2019.
Pam Freeland has kindly agreed to be the Club's Inquiry Contact Officer and Irene Wheatley our Membership Secretary .
The following Activity Co-ordinators have been appointed:
The Yarrawood renewal is proceeding well, as the Club secretary reports

The Club committee has been working hard to set up the new structure.  Contact lists have been finalised with the vast majority of members having nominated the activities they are interested in.

We will see new activities on the calendar very soon. We are aware that there are some plans in the pipeline being worked on by members and these should come to fruition in the near future. We hope to see more new activities proposed by members as well. 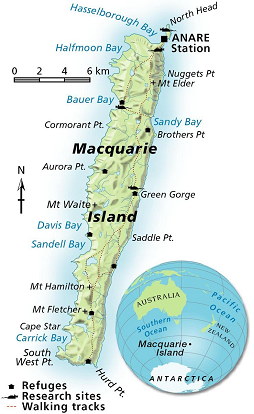 Map of Macquarie Island
A Yarrawood stalwart makes it to Antarctica

Some of you may have known that for many years it has been a dream of mine to sail south of Hobart and visit the sub Antarctic, Antarctic islands and the Antarctic continent. I finally realised this dream during Jan/Feb and the story below is about an afternoon I got to spend amongst the penguins and other wildlife of Macquarie island.

For those of you who are unaware, Macquarie Island is located in the Southern Ocean at longitude 158°55E, latitude 54° 34’S just north of the Antarctic Convergence. This is a circular zone of ocean where the cold waters of the Antarctic mix with the warmer oceans of the north. The island lies in the path of the ‘Furious Fifties’. These are the winds that circle the southern latitudes uninterrupted by any continental landmass.  It is an island of rain and wind averaging over 314 days of precipitation a year. In summer, when daylight can last for 18 hours the sun shines for fewer than 4 hours per day and has a daily temperature that can range between 0.6 – 13.6° Celsius.

So, after spending 3 days cruising, the ship has dropped anchor about half a km off Sandy Bay, Macquarie Island. With ever increasing excitement I descended the steps of the ship’s gantry on a somewhat overcast day, boarding the zodiac for the rather bumpy ride to the beach. Getting aboard a zodiac with the water level differing from anything up to one and half metres is an adventure in itself.


As you get off the zodiac you are just blown away by the wildlife. King and royal penguins, elephant seals, albatrosses, giant petrels and many other types of fauna are just everywhere you look. It seems that nobody has informed the locals of the 5m rule. They are as curious of me as I am of them. I am sure if they had access to a camera I would have been the subject. Because of the non-existence of natural predators they are completely unconcerned with our presence.

The elephant seals were huge and lounged around on the beach alone, or in groups from 2 up to as many 15-20. To the right was a large king penguin colony. To the left and up was where the royals were located. The noise was deafening, the smell interesting.  I am talking of penguins in their thousands and elephant seals in their hundreds. In between all this is the constant coming and going as they head out to catch fish or come back full, to feed waiting mouths of their chicks. The bird life was almost too good to be true. I took hundreds of photos but after an hour or two I just put the camera down and watch amazed at the constant passing parade of wildlife. It is hard to describe my feelings. It has to be the most amazing experience of my life. I spent six hours on that beach and was very reluctant as were the other 49 people of my group when we had to head back to the ship.

As we zipped back to Akademik Shokalskly I remembered a quote I had read in a book that I was reading from the ship’s library about Sir Douglas Mawson and his description of Macquarie Island in 1919:
“This little island is one of the wonder spots of the world”

After my visit, I can only strongly agree!

Twenty four hours later, we cleared the bottom of Macquarie Island, heading out once again into Great Southern Ocean where we set a course for the Antarctic mainland ……….. well I think that’s another story for some other time. 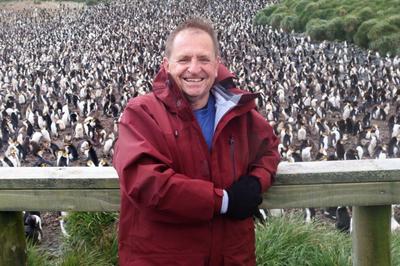 Brian with the Royal Penguins at Sandy Bay 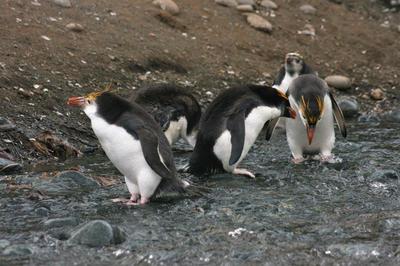 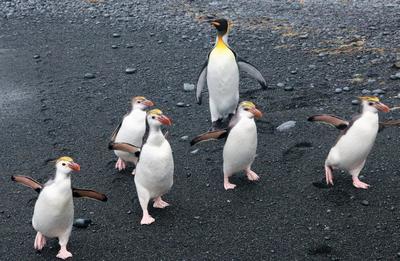 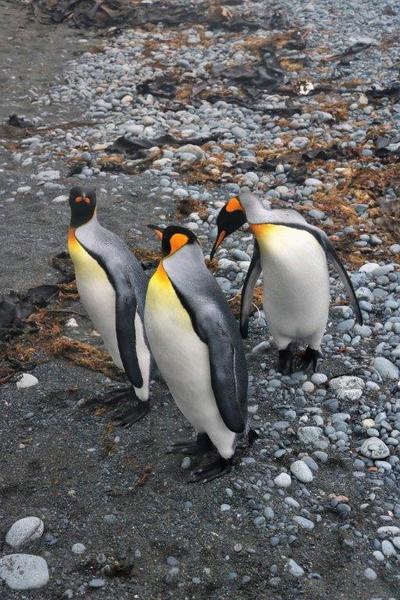 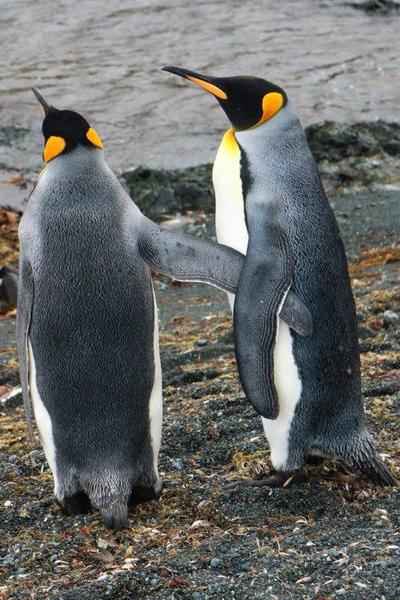 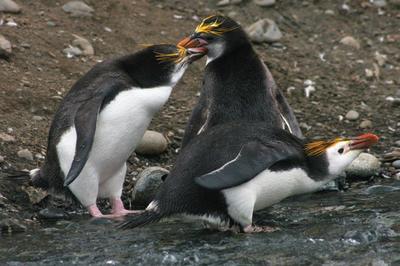 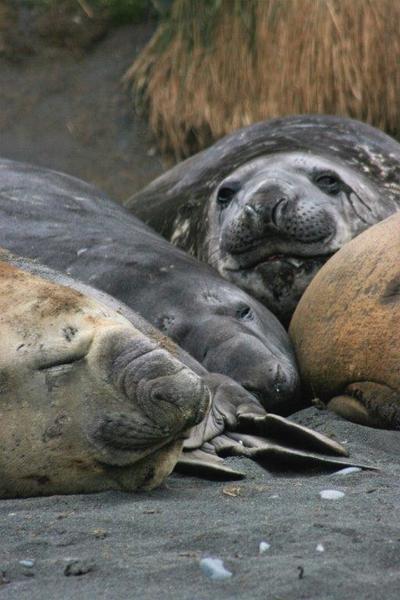 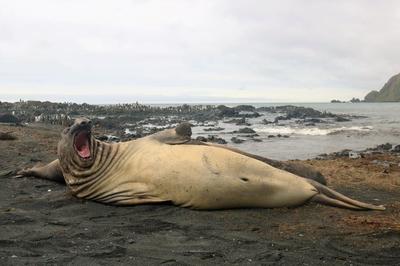